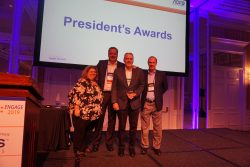 St. Charles, IL (March 25, 2019) — AOPD has just concluded its 2019 Annual Meeting, “Engage 2019,” at The Park Hyatt Aviara in Carlsbad, CA.  The AOPD Annual Meeting provides the opportunity for AOPD Business Partners and Dealers to discuss sales and marketing strategies for the upcoming year.  In addition, there are education and networking sessions spread throughout the agenda.

“AOPD just concluded another successful Annual Meeting of Members and Business Partners,” said Executive Director, Mark Leazer.  He continued, “We were pleased to roll out several new initiatives to help our members win new business in an ever-changing and challenging marketplace.  The positive reception of these programs along with the continuing deployment of our new brand and website unveiled at last year’s meeting should propel AOPD to continue is sustained growth trend, up another 7% in 2018.  Our dealers continue to make it happen in the marketplace amidst formidable industry competition and disruption.”

Kim Vogel, AOPD’s newly elected President stated, “At a time of so much uncertainty and change in our industry, AOPD brings business partners and vendors together to focus on one common goal – sales.  AOPD’s new offering of an enriched commission program for new contracts, expertise in bids response and pricing analysis. How can AOPD not win?  A great example is the chamber program offered nationally. Many dealers already have established relationships in their local chamber of commerce.  AOPD’s robust offering of a national chamber program sweetens the pot on buying from the local independent.”

The event concluded with the Annual Awards Dinner and City of Hope Presentation.  Kommah McDowell, a past City of Hope patient, shared her victorious battle over a rare form of breast cancer.   AOPD then presented City of Hope with a check as a down payment for their yearly promotion that runs April 1st – July 31st.

AOPD presented the President’s Award for Dealers to Wayne Stillwagon, of Miller’s Supplies at Work, and Brent Woods, of BIC Corporation, as the Business Partner recipient.  Both awardees are well deserving of this prestigious award and have been long time supporters of AOPD and the IDC.

In addition, AOPD presented the M.C. “Bud” Mundt Outstanding Achievement Award to Mr. Champ Davis Jr.  Champ was AOPD’s legal counsel, who sadly passed away earlier this year.  He had been an integral part of AOPD, dating back to the 80’s.  His widow, Jan Davis, accepted the award on his behalf and gave a touching speech on the importance of AOPD to Champ and their family.  This award is given to those individuals that exemplify long-term leadership and service within the AOPD organization.

The 2019 AOPD Board of Directors elected at the meeting by the Dealer members are:

Chairman of the Board – Bill Jones, The Office City

We use cookies to ensure that we give you the best experience on our website. If you continue to use this site we will assume that you are happy with it.Ok