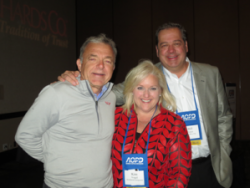 St. Charles, IL (March 5, 2018) — American Office Products Distributors, Inc. (AOPD) has just concluded a highly successful 2018 Annual Meeting at Scottsdale Plaza Resort in Scottsdale, AZ. Each year the AOPD Annual Meeting gives Business Partners and Dealers the opportunity to sit down face to face and discuss sales and marketing strategies for the upcoming year. This year was no different, as a majority of the event focused on these meetings with additional education and networking sessions spread throughout the three day agenda.

There was an additional surprise waiting for Dealers and Business Partners as the AOPD staff as well as Mike Metchikoff, OPMA; Joe Bond, Bond Digital and Mark Evans, Acumen and Action unveiled a comprehensive AOPD re-brand. A new logo, tagline, website and future marketing and sales tools were all revealed in the opening session Monday morning.

Bill Jones, AOPD’s President stated, “AOPD’s new logo and brand awareness campaign comes at the perfect time, as we continue to become better known as a national player, as evidenced by the incredible growth of the NCPA & Premier contracts, and the two new national healthcare contracts we were just awarded.”

Executive Director, Mark Leazer echoed, “AOPD continues to grow and add more contracts as evidenced by our 2017 results and the newly announced healthcare wins. With the new re-brand, we are focused on increasing the cohesiveness of our network and our brand recognition in the marketplace, so we can continue to win more business for our Dealer members and our Business Partners.”

As in past years at the Awards Dinner, AOPD presented The President’s Award to individuals who have been long time supporters of AOPD and the Independent Dealer community. This year AOPD honored Kim Vogel of Strickland Companies as the Dealer recipient of the AOPD President’s Award and Bill Cardone of TOPS Products as the Business Partner recipient. Both awardees are well deserving of this prestigious award.

In addition, AOPD presented the M.C. “Bud” Mundt Outstanding Achievement Award to Ms. Sharon Stepien. Sharon was AOPD’s General Manager and Manager of National Operations who retired in August of 2017 after working at AOPD Headquarters for 22 years. This rare award is only given to those individuals that truly exemplify dedication and outstanding leadership within the AOPD organization.

Chairman of the Board – Frank L. Fera, Bulldog Office Products

Leazer concluded, “A special thank you to this year’s Corporate Platinum Sponsor S.P. Richards. Special thanks also to all of our event sponsors this year: Gold Sponsor, Essendant; Silver Sponsor, 3M; and Bronze Sponsor, Smead Manufacturing. We are looking forward to a prosperous 2018 and hope to see everyone again next year March 10-13, 2019 at the Park Hyatt Aviara in Carlsbad, CA.”